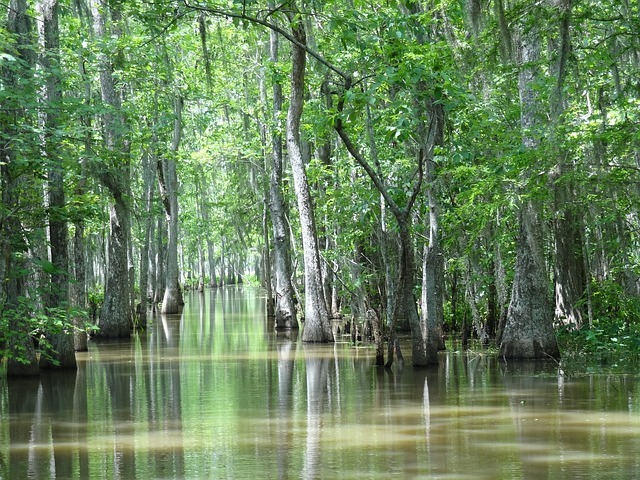 Anywhere else in the world, coming to a crossroads is a well-defined setting. In the swamps, you don’t have definition, just a vague notion that you might be able to take a left or right turn instead of going straight ahead.

I have come to define depression as a crossroads of sorts. Going back is never an option. You only get three choices: left, right, or forward.

During normal times, you look in each direction, and you can see possibilities. Right might lead to a new job. Left could take you to a new city. Straight ahead might mean meeting that special someone.

During a depressive state, you look down those roads and see nothing. Good, bad, interesting, scary–those things would be something; but there’s nothing. The road goes on and on, and there isn’t anything to make one direction more appealing than any other.

You look backward. Nearest to you might be a total shit-storm of bad. Further away, some happy times, some interesting people, some success stories. Most of it is just la-dee-dah, ho-hum-drum stuff that many of our days are made of. At least it’s something, though. At least it’s visible and tangible evidence that the past was made up of something.

The future, now. You’d settle for some of that hum-drum la-dee-dah, wouldn’t you? But no matter where you look, there’s nothing to see.

Probably it’s best to just sit right down here in the middle, look backwards and refuse to move. Don’t make any choices. Stagnate.

I contend that this state is even worse in the swamp. You can’t even see the damn road! All you can do is guess where that left or right turn might be. And all you can see is muddy water, weeds, snakes and possibly a crocodile or two. The shit-storm just behind you almost looks like a dull school dance. You’d go back if you could, but back is never a choice.

Sitting down isn’t a choice, either, especially not in a swamp. God knows what you might sit on.

So what’s it going to be? Snakes? Crocodiles? Some creeping vines just under the surface that will wrap around your ankles and drag you down to drown?

Swamp or desert, the crossroad demands a choice, and the only real choice is to just keep moving. Left or right, or straight ahead, there will at some point be a little something to see on the road in front of your eyes–you just have to keep moving until you see it.

Until you see it, imagine it–the new job, the new city, the new love. Believe that it is out there, and all you have to do to get to it is just keep moving. Just keep fighting. Just keep putting one foot in front of the other.

It will be hardest in the swamp–you’ll be slogging through murky waters filled with sludge and slime. Remind yourself that your legs will be stronger than they’ve ever been when you reach dry land again. Remind yourself that in the wider scheme of things, Louisiana isn’t that big–there’s a lot less swamp than dry land out there, and you will be walking tall once you get there.

Sure, you’ll get muddy. Mud washes off. Roads eventually lead somewhere, and you are worth the trip. Pick a direction, and keep moving. Never give up, never give in, never stop fighting for you. Go.

3 thoughts on “Crossroads of Depression”