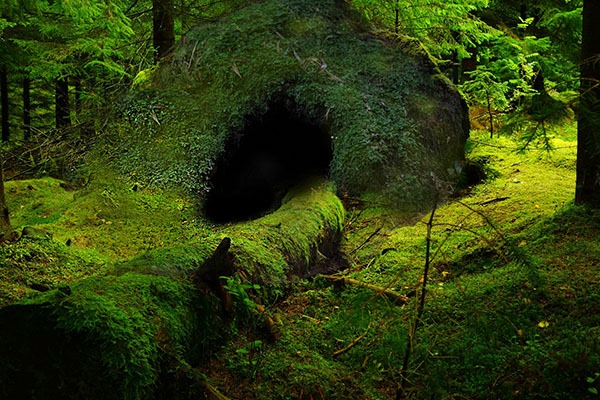 Ever since we were small, I have looked to Penny for…well, everything. She’s smart. She’s brave. She faces every challenge with her shoulders back and her head high. She kept Dawn and me alive when things went to hell, and I don’t know anyone else who could have done that.

She jumped into garbage to save our little Dawn from drowning in that filth. Sure, I followed her in, but I never would have had the guts to lead the way.

Penny is my hero.

Brave as she is, though, she’s no fool. Also, in spite of our crazy lives, she is perfectly sane.

“Are we going in there?” Sid asked.

“Not in a million years,” Penny replied.

“It looks like some old drainage culvert,” Ash said. He shrugged when I turned to stare at him. “Hey. I read!”

We were pretty far from camp, and had wandered this way in a fit of some defiance, really. Daddy and Grandpa had insisted that we all had to stick together when we went out into the forest to forage and hunt. Usually, Sid and Penny went their own way, as did Ash and I.

Still, we had promised, and so we stuck together and wandered farther than we’d previously gone looking for wild berries and game.

This… I guess we could call it a culvert. Close enough, I suppose. It looked more like the gaping entrance to a dragon’s cave to me. Overgrown with moss, the hole was big enough to drive a truck into.

Walking up to it, we could discern the downslope of the terrain, although it was subtle. We agreed that runoff from the melting winter snows would run right in, but the ditch was currently only wet enough to support the lush growth of moss.

We all looked at Penny. Her eyes widened in surprise. “What, me?” she cried. “Why do you think I know the answer?”

“Do you?” Sid asked quietly.

Penny rolled her eyes, and huffed out an irritated breath. I resisted the urge to tell her to grab Sid and run off into the trees to relieve her stress.

Penny is the keeper of the books in our camp. This doesn’t mean she does anything financial. We don’t deal with money at all these days. What money still remains is often used in board games, although Penny does use currency to teach the younger kids arithmetic skills. There’s not a kid in camp over the age of six who doesn’t know how to make change, even though they’re never going to have to do it.

The books Penny keeps are actual books that she and Sid and a few others salvaged from the public library when they scavenged in the city. There are encyclopedias and dictionaries, history books, how-to books, you name it. Plenty of fiction, too.

The thing is, she has read nearly everything. She soaks up knowledge like a sponge. It’s like she has to know things.

She didn’t look totally certain of herself this time, though. “Look,” she said. “From what I’ve read, a lot of culverts were built to run under roads and bridges to prevent flooding. But, look at this–it looks like it goes straight down!” She led us on a little jaunt around the hill-like mound. “I don’t see any sign of a road, do you?”

“Does anyone have a flashlight?” I asked.

“We are NOT going in there, Mae!” Penny cried.

“I don’t think that’s a good idea,” Ash argued. “What if something has denned in there?”

Well, that knocked the joking mood out of me.

“I think it really is a culvert,” Sid remarked. “Maybe it was man-made to prevent flooding and direct run-off to the aquifer that we get our water from.”

We all agreed that it made sense.

“Still,” Penny mused, “who made it?” She looked around, and started walking in the direction the cave faced away from. “I think there must be a road, somewhere around here.”

“Penny, wait.” I reached into my satchel, looking for the yellow twine we used to mark our way when we were in unfamiliar areas. We all had compasses, but didn’t entirely trust them in the forest. Take three steps one way or the other off the original path, and you were likely to get lost in spite of moving in the right general direction.

Penny folded her arms under her breasts and waited while I made sure there was plenty of twine left. Sid patted her shoulder.

“I think we can go at least another mile,” I told them, and Ash grinned at me. He’s always up for an adventure.

“If we find anything good, we can leave the markers up,” Sid remarked.

I nodded. Otherwise, we would retrieve the twine as we made our way back to camp. Waste not, want not. That was the code we lived by, and for good reason. There was no one making new products these days.

We followed Penny. I don’t know what she sees that we can’t, but she finds things all the time, so when she wants to look, we go along.

The ground continued to slope gently down; nothing like a mountainside, much less than that sort of grade, but we could feel it in our gaits. There was a thick growth of trees, and we marked our way frequently.

Suddenly, the tree line altered, and there was rickety wooden bridge just ahead of us. It was built up on the far side, where the land took a sudden dip. From where we stood looking at it, we could see the tops of the trees beyond the bridge, so it was a significant slope.

“Okay, we’re not walking over that,” Sid announced.

“No,” Penny agreed. “Even though I do want to see the other side, and see if there’s a culvert down there.”

The bridge crossed our path. We turned right and followed it from our side. It wasn’t long before it joined an unpaved road that we felt comfortable crossing. Looking back the way we’d come, it was impossible to see the far side of the bridge through the dense growth of trees. It was also impossible to walk on the land on that side of the bridge; one misstep, and down you’d go.

“No,” Sid interrupted firmly. “That bridge hasn’t had any maintenance in at least ten years, probably more. You put a foot through rotted wood–”

“Okay, okay.” Penny was irritated that she couldn’t confirm the culvert, but it didn’t really matter. It was likely. It was logical. Water runs downhill. What more did anyone need to know?

“This road is still pretty good,” Ash said. “I don’t think we need to use the twine; we can follow it back to the bridge without getting lost. Can we check it out?”

We walked for about twenty minutes before the road curved to the right and then sloped down sharply.

We stood side by side, looking down upon a little village. On the near side of the place stood a large, warehouse-like metal structure. A couple of semi-trailer trucks were parked there, backed up to closed loading doors.

“Well, well,” Penny said. “This is interesting.” She reached over her shoulder and pulled her crossbow out of its sling. We did the same, and loaded up.

We moved back into the trees and followed the road down, walking sideways, foot-over-foot and keeping an eye out in all directions. There was no sign of life, but none of us were willing to take any chances.

As we got closer, it became clear that the trucks were standing on flat, rotted tires. The houses we could see were intact, but roof-tops displayed missing shingles and sagging corners.

“Wish we had a map,” Ash muttered. “How did we miss this place? There’s at least two dozen houses here.”

“Must be one of the unincorporated towns,” Penny remarked. “People must have fled. I don’t see any cars, do you?”

“I know.” Penny hunkered down, so we squatted, too, facing her. “I’d like a look in those trucks,” she said. “The warehouse, too, if we can get in. But–” she held up her hand, palm out, to stop Sid from cutting in. “But, we can’t do that alone, right Sid?”

“Because we’re just kids,” Penny added, her tone only slightly edged with sarcasm.

“Most likely, there’s no need,” Sid added. “But if someone is there, we’ll need reinforcements. And even if there’s no one there, if there’s anything good in the trucks or the warehouse–”

“Or the houses,” I interrupted.

“Those, too,” Sid agreed. “If there is, we’ll need reinforcements for that, too.”

Once we made it to the bridge, we followed the path of twisted yellow twine markers back to the moss-covered culvert.

Facing the entrance, Penny sighed. “Morty’s going to want to poke his snoopy nose in there,” she said. “You know that, don’t you?”

Sid barked a laugh. “I guess we’ll have to be locked and loaded when he does.”

Defiantly, I said, “I don’t believe there’s a bear in there.”

I turned to lead the way back to camp, hoping we’d see some berries or a rabbit along the way so we wouldn’t be returning empty handed.

Things were quiet for a few minutes as we tramped through the grass. Then, I felt a hot breath on my neck, and a low growl rumbled in my ear.

I shrieked in terror, and started to run.

Then I stopped abruptly, and turned back to see Sid, Penny and Ash rolling on the ground and laughing uproariously.

I stomped my foot and glared at them. “Assholes!”

There will be retaliation.

As soon as I think something up.

Author’s note: Once again, Penny, from  Starting in the Middle of The End, shows up with her usual entourage, but this story is told from her sister Mae’s perspective.

Part 2 of this story is coming soon.