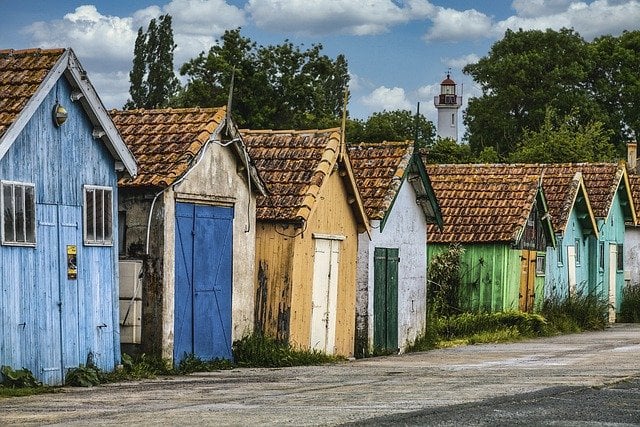 They weren’t really houses. They were storage sheds-slash-garages. Garishly painted in pastel colors, they stood out like sore thumbs in the alleyway.

The first time I saw them, this silly song jumped into my head, that old tome “Little Boxes”. Of course, if you really listen to it, it isn’t silly at all. It shares a truth people might like to ignore.

But those sheds—the words “ticky tacky” just fit. They look like someone threw them together from scraps and tried to disguise their essential junk funk with pretty pastels.

They are not pretty. They’re hideous.

I think that’s what drew me to them, honestly. The tacky paint jobs, now seriously in need of fresh coats, made them singularly unappealing. You looked, and then you looked away, appalled.

It lent them an air of invisibility.

Invisibility was exactly what I needed.

I’d done my research and knew that they had been deserted a few years back. The owner had been renting them out to folks in a nearby projects housing development for cheap. The housing had been torn down and everyone collected their cars and their junk and moved on.

I hear tell that some folks left their stuff and the owner had a shed sale to get rid of it all. I don’t really know the whole story, and it doesn’t even matter.

What matters is I needed someplace to lay low while Barry was still on his rampage, hunting me down.

He always swore I would never have the nerve to leave him. “I take care of you, babe,” he said. “I pay the bills around here—you’re nothing but the freeloader I allowed to use me. So buckle up, Buttercup!”

The worst part of it? He was right. I didn’t dare leave. I didn’t have a job, or any marketable skills. Where would I go? What would I do? I was nothing.

But that changed. The little plus-sign on the stick I peed on changed everything.

I had been nothing, but now I would be something. Now I would be a mother. And my baby was not going to grow up in that environment.

If I could get to Mallory, I would be fine. But she’d be the first person he checked with. And he’d keep checking.

So I didn’t call her.

I made a get-away plan. I had to do it quickly, before Barry realized what was happening inside my body. The last time I’d dared to get pregnant, he’d fixed that situation quick.

I wasn’t stupid enough to tell him this time.

I pulled money out of the checking account I wasn’t supposed to use for anything but grocery shopping. At first it was ten dollars here, twenty dollars there—it was easy to hit that cash-back button when I scanned the card, but I didn’t want amounts that would draw attention. Not right away.

I had a little stash of my own that I had been building on since…since the last pregnancy. “Change” from the washing machine. Barry notoriously refused to clean out his pockets before throwing them on the bathroom floor, and sometimes I was able to net as much as fifty bucks on laundry day.

If he asked if any money was there, I’d give it to him. I’m not crazy. “Oh, yeah, honey, it’s in the laundry room, let me run and get it for you.” But basically, it meant nothing to him. He usually returned his cash to his wallet, and the bills he occasionally stuffed in a front pocket generally amounted to only a dollar or two. But I did get lucky sometimes and found a ten or a twenty.

Hey, it adds up over a couple of years.

I walked one day to a used car lot to look around. I bought this little car that looks like it is being held together with toothpaste and duct tape and chicken wire, but runs like a dream. They guy who sold it to me said his son used it as a motor shop project at school, but he dropped out before doing the body work.

“Knocked up his girlfriend.” The guy looked disgusted and disappointed and proud all in one second—it was uncanny. “Got his GED, though. He’s working.”

He didn’t want to deal with the body work, and I didn’t care what it looked like as long as it would run, so we made a good deal.

I took some clothes and the few personal items I care about and I checked out of hotel Barry for good.

Fine, upstanding citizen Barry was not going to come looking for me on the far side of town where even the projects won’t live anymore. He would expect me to look for help among our moneyed friends and neighbors, and he’d have some wonderful stories to tell about how crazy and messed up I am.

That wouldn’t be a lie, exactly. I’m pretty messed up. But now I believe there were a lot of our friends who suspected the problem was not me.

I left my big house and my nice car. I left my books and my cell phone. I copied all the phone numbers I might want later into a tiny address book and kept that on me at all times.

I set my sights on the blue ticky-tacky box because the door looked big enough to drive the car inside.

It was nothing but a space, that shed. When the car was inside, I didn’t have much room. But I cleaned it up and made a home out of it. I got some old fruit pallets from the ship yard and put an air mattress on top and made myself a decent bed. I found an old card table at the dump and cleaned it up and got myself a folding chair. I spent some ill-gotten money on a hibachi so I could cook.

I became queen of second-hand. The trunk of my car was my closet. I dressed in rags and went to the soup kitchens. I kept my head down.

I kept my eye on the news—Barry didn’t report me missing right away.

When he finally did call the police, the speculations started. People we knew started speaking out about how they suspected I was being abused.

It was so weird to hear an acquaintance of ours talking to news reporters about how she failed to reach out to me and find out if I was okay, and then starting to cry. I felt like I barely knew her. All the friends were Barry’s, you know?

I used a free clinic to keep tabs on my baby. I didn’t use my real name, and they specialized in “no ask, no tell”. But this morning my appointment went a bit off the rails.

“If you know who I am,” I retorted, “they you must understand that I certainly do have to keep this up.” I started to cry—big, sloppy sobs, the kind people call “ugly crying”. What else could I do?

“You don’t understand.” I pulled up my stupid paper hospital Johnny and used it to wipe my face. “This baby—I have to keep him safe.”

“Lila,” she said—using my false name, bless her heart. “Don’t you have someone you can call for help?” She rolled her little stool closer to where I sat on the cold metal examining table. “I know from the news that you were a foster child, so you don’t have family, but—”

“I sometimes think,” I whispered, “that it was one of the things that made me appealing to him.”

“I wouldn’t doubt it for an instant.” Dr. Morgan looked grim. “I’ve seen that sort of co-dependency before.”

“I have a friend. A good friend. But I don’t want…him…to bother her. I mean—he’s probably already been bothering her.” I shrugged. “That’s why I haven’t called her.”

“Where is this friend? Close?”

“Look. I’m not going to ask you where you’re staying, or how you’re getting around. I have to assume you’re somewhere close by. You’re certainly nowhere near your…um…neighborhood.”

“I can send you to someone who can help you get to Chicago,” she offered. “And get you a safe place to stay in the meantime.”

“I don’t want to go to the shelter,” I cried. “They’ll be obligated to tell the police where I am, and then Ba—” I stopped, horrified that his name had almost slipped out of my mouth. “They’ll tell him. I know they will.”

Dr. Morgan shrugged. “Right now they think he killed you,” she stated flatly.

“They do?” That was interesting. I hadn’t heard that on the news.

“It’s in their demeanor. The things they say when they appeal to the public for information.”

“Oh?” I had a sudden thought. “And has…has he made any appeals?” I slammed my hands over my mouth. “No—don’t answer that. I’m not falling for any more of his shit.”

“It so happens that he has—big press conference and everything.” Dr. Morgan folded her arms. “I wasn’t all that impressed, frankly.”

“Who else here know?” I demanded. “Everyone?”

The doctor looked surprised. “Not that I know of,” she assured me.

I was not assured.

What had I been thinking? A short haircut and a change of color and oversized sunglasses apparently didn’t do enough to change my appearance.

She looked uncomfortable. It made me suspicious.

She took a deep breath and tightened her lips. “Okay,” she said. “I don’t talk about this—ever. But I have been where you are. Oh—” She held up her hands to stop my protests. “Not exactly where you are; but close enough.” She shrugged. “Someone helped me. Now I want to help you.”

That would be a whole book worth of story, and I may tell it someday.

For now, I just want to tell you that no one ever looked in that ticky-tacky house. Mallory and Susan—Dr. Morgan, that is—came here with me today. I showed baby Mickey my beat up old heap of a car and my stash of throw-away furniture and my hibachi. He grinned and drooled and was absolutely unimpressed.

“You should show more consideration, Mickey,” I said. “Mommy got out of the box.”

We loaded the car onto a trailer and hauled it back to Chicago. I’m taking an auto shop class, and I’m going to give it the body it deserves.

One thought on “Ticky Tacky Houses”